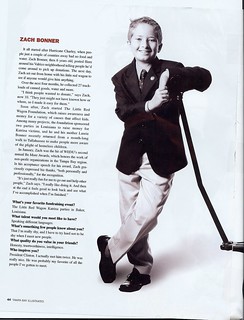 Taking place in Tampa, Florida, Little Red Wagon is a story about a boy named Zach Bonner who is on a mission to help homeless children. He was only six years old when Hurricane Charley hit the Tampa area in 2004. He was in awe of what the storm did to his neighborhood and decided to collect supplies for the homeless and other families affected by the hurricane. In his efforts, he collects 27 truckloads of supplies and donates them to homeless families in his neighborhood.

Zach Bonner is now seventeen years old and has been involved in many incredible activities for homeless children and adults. He has also raised thousands of dollars to help those in need. He is the founder of the Little Red Wagon Foundation. This nonprofit organization raises money for underprivileged children. His efforts are supported by his mother Laurie and sister Kelley.

Zach Bonner has been an active volunteer in his community since he was a young boy. He helped collect supplies and toys for the displaced children during Hurricane Charley and continues to help others through his Little Red Wagon Foundation. His efforts include collecting funds, donating supplies and running a fundraising booth at Florida Virtual Academy.

The nonprofit organization’s mission is to provide innovative programs for underprivileged children. It provides lifesaving health care and pediatric specialty clinics in Southwest Florida, Naples and Port Charlotte. In addition, it integrates lifesaving health care into local schools. It has raised hundreds of thousands of dollars to support children in need. The organization has also partnered with national organizations to distribute Thanksgiving meals, Christmas gifts and school supplies.

During the filming of the film, Zach received a Truly Moving Picture Award from the Heartland Film Festival. Zach’s efforts have received praise from Elton John and Pamela Anderson, and the charity has raised over $500,000. The charity has also provided 350 meals to families with children suffering from pediatric cancer.

In addition to his fundraising efforts, Zach has been involved with the Little Red Wagon Foundation since he was six years old. He is currently a Florida Virtual Academy student and he enjoys tennis, swimming, and volunteering. He plans on working on his own charity in the future. He is also a big fan of Elton John’s music.

Hey, I am Alex Franklin the owner of LRWF Organization. Through teamwork, learning, leadership, and capacity building of our members, our objective is to ensure educational justice and excellence for children and young facing homelessness, particularly high-mobility children and youth.